Now the official countdown to the Academy Awards can begin, which takes place on Sunday February 22nd, sure to wow & inspire more amazing style. Who wore your favorite look? What trends are you still talking about? For all the latest on this awards season, check out previous Red Carpet Review posts with complete galleries from the Golden Globe Awards & Critic’s Choice Awards. If that isn’t enough, get more celebrity inspiration from Style Darling‘s spring dress predictions featuring Kerry Washington & Allison Williams, how to style a statement necklace like Katy Perry or Emma Roberts, & Jennifer Lopez’s stylish press tour for her new movie, The Boy Next Door! Happy Styling!

This is a first for Style Darling. The 64th Annual Emmy Awards are currently airing & I’ve been scouring the web for the last 45 minutes to put together a complete gallery of the fabulous red carpet looks. Some of my favorites include Zooey Deschanel in a princess-like Reem Acra look, Julie Bowen in neon Monique Lhuillier, Claire Danes as a blushing mom-to-be in Lanvin, & Christina Hendricks in a belted design by Christian Siriano. Who are you rooting for? I’m a big fan of Girls, so keep an eye out for the very multi-talented Lena Dunham! Check out the gallery & share with readers which looks are your favorites! Enjoy the show! Happy Styling!

I’ve been on the prowl for great fall finds & one trend that keeps stopping me in my tracks is leather & it’s just not going away.  Why should it? The luxe, lush material adds an edge to a feminine blouse, contradicts a flirty skirt, makes you look like a rock star, or just helps any Style Darling stand out a little bit more.  Take it from some of our favorite celebrities, including Jessica Chastain, Kate Bosworth, Lucy Hale, Nicole Richie, Sophia Bush, Maria Sharapova, & Rosie Huntington-Whiteley. 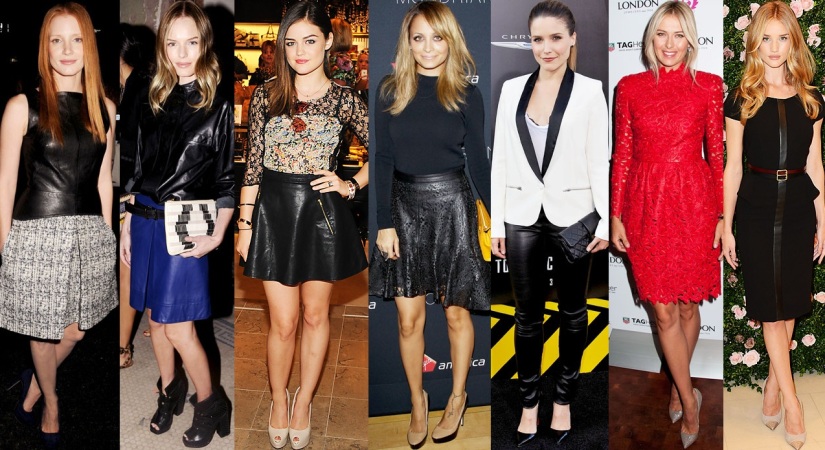 My previous post about summer leather shared looks worn by Emma Stone, Alexa Chung, & Julianne Hough, but our calendars change to fall in just a few days, so why not start looking at ways to wear leather- or faux leather in this case, that can really spruce up your current wardrobe, as well as help welcoming the season. 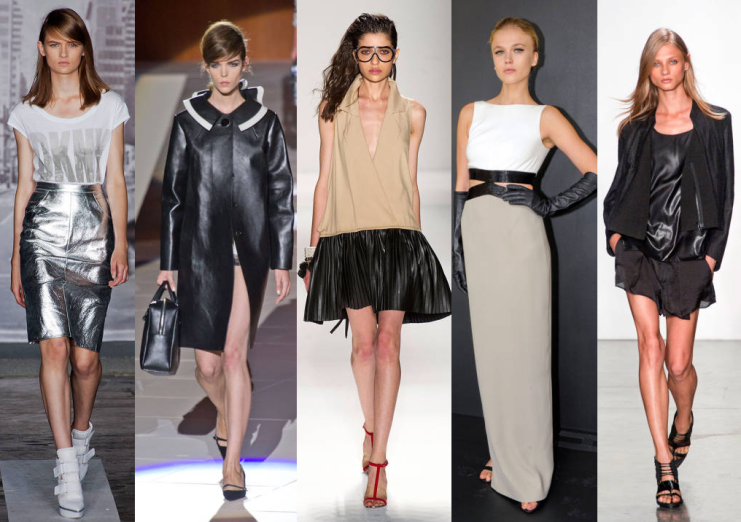 However, when it comes to affordable fashion, it’s not always easy to find leather when you’re shopping on a budget. Enter: faux leather. You can’t forget that faux leather isn’t harmful to animals & is always less expensive.  It’s so easy to find faux leather separates, jackets, & dresses these days & I couldn’t decide on just a handful of items, so brace yourself… there’s a lot to look at! 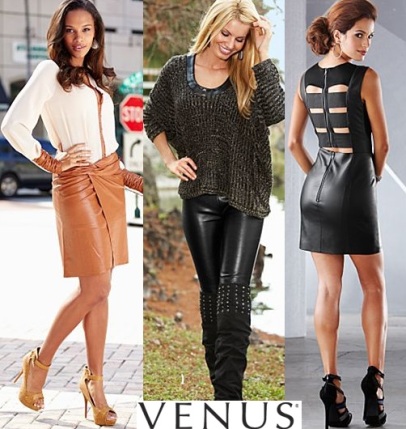 What caught my attention to start posting about all these leather trends was a recent post made by Venus that I spotted on my newsfeed on Facebook.  These looks all include faux leather items, including (from left to right) the faux leather trimmed blouse ($36.00), faux leather mini skirt ($32.00), peep toe ankle strap heel ($39.00), sweater with faux leather ($18.00), faux leather leggings ($44.00), & faux leather dress ($64.00) in black. Of course, I couldn’t just write about items from one store, so here’s some more! 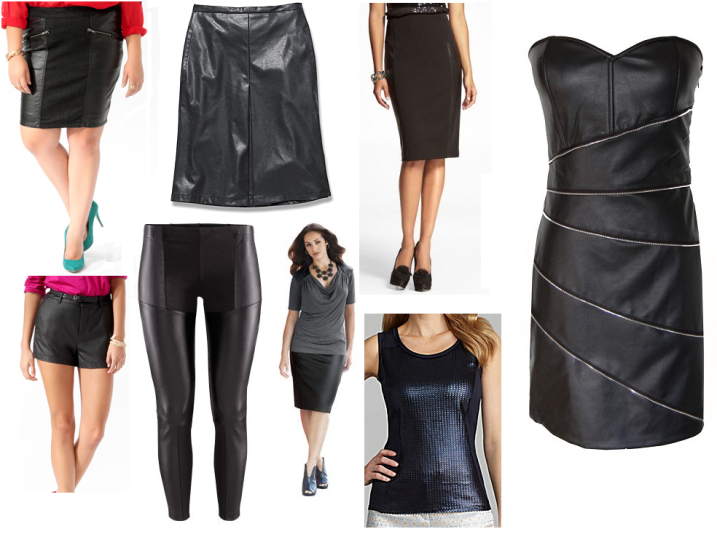 I should disclaim that I do not condone wearing any of these items with other faux leather pieces. You can take that risk if you’d like, but to avoid looking like a biker chick or appearing as though in costume, I’d recommend allowing for one item to be the standout & then mix with other fabrics to create a multi-dimensional & textured look.  First, the zipped faux leather denim skirt ($19.80) comes from Forever 21 & is available in plus sizes 12-20.  Underneath, you’ll find the essential faux leather shorts ($15.80), which are perfect for fall with tights & ankle booties.  Pair either of these bottoms with a fabulous blouse, studded tee, or menswear-inspired button-down.  The a-line skirt ($39.00) from Joe Fresh is cute for bringing to life the looks worn by Selena Gomez & Nicole Richie at the top of this post.  Also, add just a hint of leather with the zip back pencil skirt with (minus the) leather ($59.90) from Express.

We all know that leggings are all the rage right now, so to find the perfect pair for this edition of Basics for a Bargain, I turned to H&M for their leggings ($24.95) in black, which are also available in white, if you dare! Break these bad boys out with a chunky oversized knit & your fiercest pointed toe pumps, or help a graphic tee look less casual & top it off with a satin blazer.

I also found the plus size tee with faux leather shoulders ($34.99 – $39.99) from Jessica London & Antonio Melani Sardinia faux-leather top ($34.65) @Dillards which pair well underneath a suit for the office, or with dark denim pieces like jeggings or a mini.  If all-over leather isn’t your thing, then the touch of texture on the shoulders helps frame your face & becomes an accessory to your look. Lastly, the faux leather strapless cocktail club dress ($54.99) in black 2 cute 2 trendy crawls near the borderline of pinup, but with asymmetric zipper details, you could be working it just like Kristen Stewart or Brooklyn Decker do when making red carpet appearances.

Which leather pieces are your favorite? Which celeb looks the best in leather? Are you a fan of real leather or would you rather wear faux leather? How would you style your leather look? Happy Styling!

It was obvious that the small screen stars were bringing the larger than life glamour to the red carpet for Sunday’s 62nd Emmy Awards.  All the leading ladies of television were following the trends of black, white, navy, & one-shoulders.  Let’s just start with my absolute favorite of the night. Instantly, I knew that this would be a crowd-pleaser, guaranteed to be published in fashion magazines across the world. Claire Danes, pictured below, in a shimmering Giorgio Armani Prive strapless mermaid dress.  Already it is listed on InStyle‘s Look of the Day.

Surely, Monday night’s presentation of E!‘s Fashion Police will agree with me.  Regretfully, I didn’t get a chance to see the beautiful & talented Claire in the HBO movie Temple Grandin, for which she was nominated, but as soon as I saw this dress, I knew she was going to win for Best Lead Actress in a TV Movie.  Just like when Charlize Theron wore her gold body-hugging Gucci gown to the 2004 Oscars, winning for her role in Monster, & Sandra Bullock wore her gold / silver Marchesa dress to this year’s Oscars, winning for her role in The Blind Side.  A gold dress is a winner’s dress! 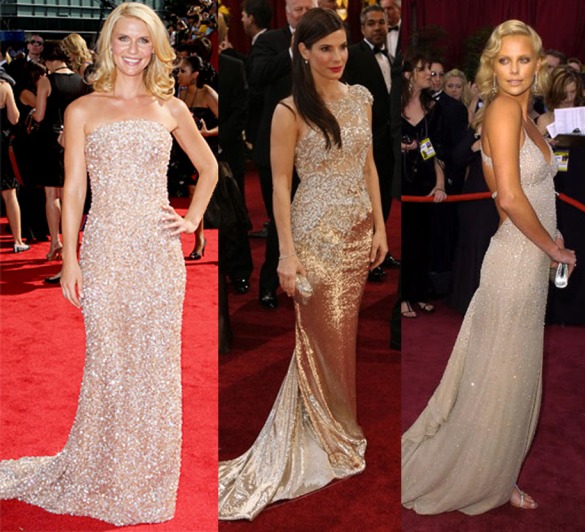 As for the black trend, I was surprised b/c not many stars take the tricky color under consideration.  Of course, black done the right way is slimming, but for such an elegant affair, to risk losing some of its detail & beauty in photographs is where black goes wrong sometimes.  Anyway, take a look here at Julianna Margulies in L’Wren Scott, Heidi Klum in Marchesa, Eva Longoria-Parker in Robert Rodriguez, Julia Louis Dreyfus in Narciso Rodriguez, & Kelly Osbourne in Tony Ward Couture:

I guess you can’t have black dresses without the white ones & there was no shortage of that at the Emmy’s also.  White was a favorite among celebrities with figure flattering designs, metallic embellishments, & gorgeous hair. Here we have the white selection with Rose Byrne in Gucci, Kim Kardashian in Marchesa, Julie Benz in Pamella Roland Resort 2010, Brooke Burke, & Amber Riley: 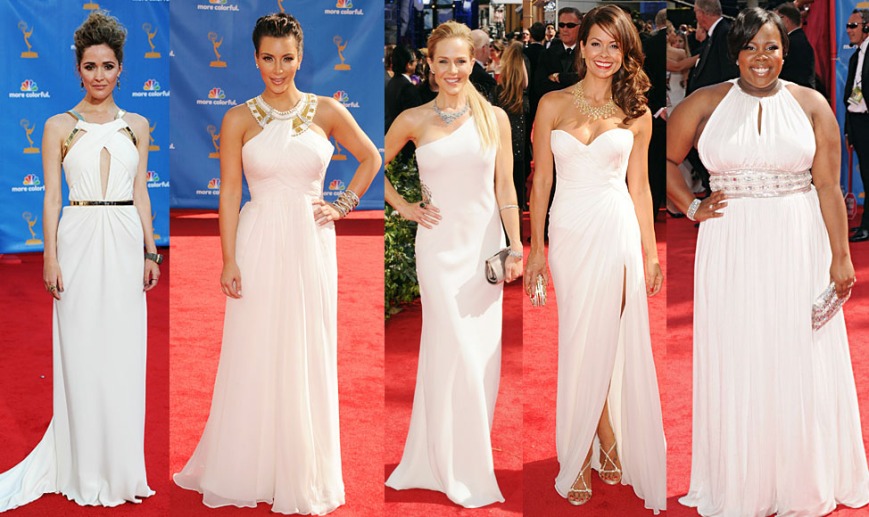 Lastly, a trend that’s been all over the runways & red carpets for a few years now that’s always a flattering choice is the one-shoulder look.  The celebrities who embraced this were Emily Blunt in Christian Dior, Jane Lynch in Ali Rahimi, Emily Deschanel in Max Azria Atelier, Nina Dobrev in Zuhair Murad, Elisabeth Moss in Donna Karan, & Cheryl Hines in Zac Posen:

Although I didn’t mention this in my intro, I’d like to point out the risk-takers, in my opinion, who both rocked their looks & maybe didn’t succeed as they’d hoped, but still, they deserve some praise.  I’m not saying that I don’t like these looks, but for me, they qualify as risk-takers.  Whether they were experimenting with lace, beads, prints, shape, or hemline, they stole the attention on the red carpet for just a little bit longer than the rest. Check out Diana Agron in Carolina Herrera, Tina Fey in Oscar de la Renta, Jane Krakowski in Escada, January Jones in Atelier Versace, Rutina Wesley, Sofia Vergara in Carolina Herrera, Jewel in Zuhair Murad, Kristen Wiig, & Maria Menounos in Ralph & Russo:

My predictions on the gowns that will be most knocked off are: Claire Danes’ Armani Prive, January Jones’ Atelier Versace, Kim Kardashian’s Marchesa, Emily Deschanel’s Max Azria Atelier, Heidi Klum’s Marchesa, & Eva Longoria’s Robert Rodriguez.  Also, my only gripe with the whole evening was the absence of past favorites like the cast of Grey’s Anatomy & Desperate Housewives.  Stars like Sandra Oh, Katherine Heigl (well, not anymore), & Ellen Pompeo, as well as Felicity Huffman, Marcia Cross, & Teri Hatcher were always interesting to watch on the red carpet, but alas, a new generation of Gleeks, reality show stars, & vampires have invaded the scene.  Happy Styling!