Obviously, 2014 has been one stylish year, especially when you consider the multitude of red carpet appearances, street style looks, cocktail frocks, & day-to-day ensembles that our favorite Style Darlings have sported. A number of breakout stars have made the best dressed gallery. It’s really incomplete since there are still so many gorgeous looks worth talking about that have made this calendar year a little bit more stylish.

Enjoy the gallery & slideshow, featuring a thorough & vast collection of images to inspire an even more fashionable 2015. Happy Styling!

As much as I’m a fan of dresses, especially this summer since I’ve worn a dress most days of this season, I’m always pro-skirt, especially when it comes to transitioning from one look to another for a variety of occasions. This fall, I’m headed all over the place: the classroom, my academic job, my retail job, an internship in NYC, & wherever my personal life takes me. I turned to some of the most stylish celebrities for a little skirt inspiration, both on the red carpet & when they’re showing off their street style. This includes Miranda Kerr‘s emerald green & violet matching separates(shop here) by Escada at the Escada Joyful event last month, supermodel Chrissy Teigen in a printed crop top & pencil skirt (shop here) by Milly with nude ankle strap sandals, & Lily Collins in a head-to-toe mix print look by Chanel while attending the label’s latest fall/winter runway show. 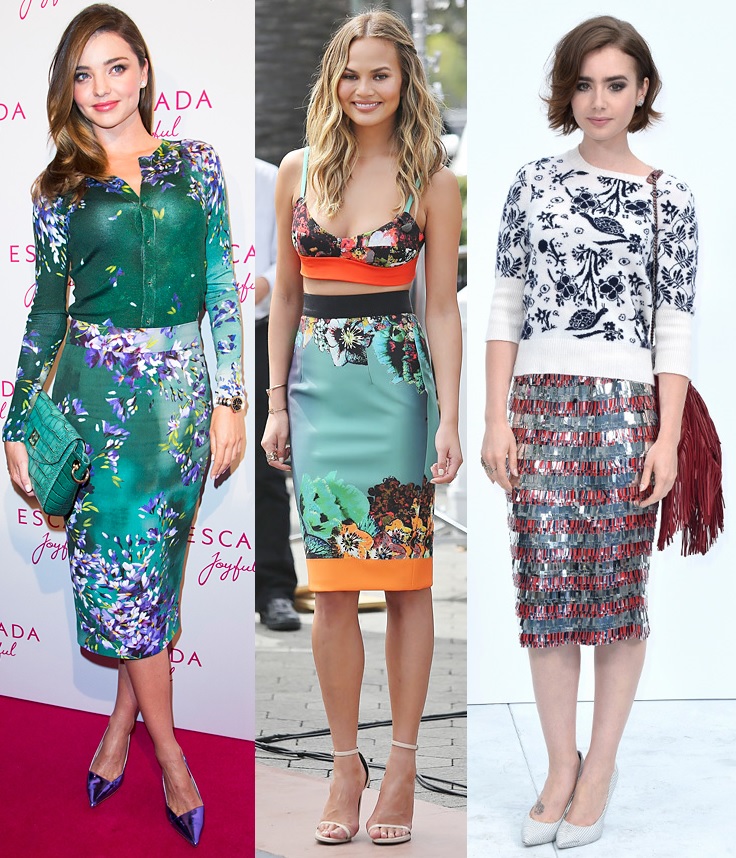 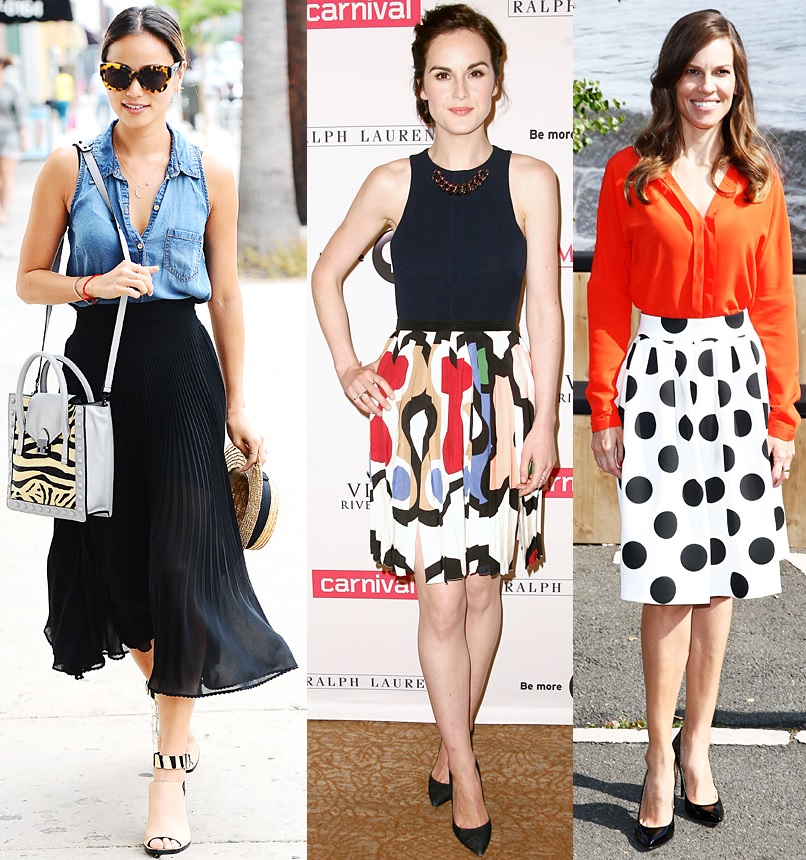 Also, there’s Style Darling Jamie Chung out & about in Los Angeles this summer in a black pleated midi-length skirt with a chambray top & accessories (shop here & here) by Loeffler Randall, Downton Abbey star Michelle Dockery showing off her playful side in a look by Victoria Beckham with rings by Melinda Maria & EF Collection while attending the show’s photocall this summer, & two-time Oscar winner Hilary Swank at the Marc Cain spring/summer 2015 show in a blouse & polka dot skirt by the designer with black patent pumps.

While I was flipping through the first wave of September issues of my favorite magazines, I came across a few ads that caught my eye & was suddenly inspired by skirts for fall. Here are a few of my top picks that are sure to work with your current wardrobe staples, as well as make a new statement about your fall style. Below, said skirt that inspired this post was the Worthington long pencil skirt ($19.99) in blue geo print from JC Penney, which I could imagine worn with a crisp white button down, a black t-shirt, or a cobalt pintucked blouse. To bring out your softer side, I choose the brushstroke print A-line skirt ($22.80) in black & cream from Forever 21 because it just screams Charlotte York to me!

If you’re really looking to mix things up, try this metallic skirt ($29.95) in silver from H&M, which is a great investment for any time of year, paired with a pastel blouse (like that shown in the image above) or an embellished sweater for the holidays. The assymetrical zip skirt ($24.99) in black from Target is a modern twist on the classic, all-purpose pencil skirt, especially if you’re headed to an interview at a trendy office, or looking to dress up your favorite rocker tee. I’m also a big fan of this because it’s available in gray & sizes X-Small to XX-Large. Lastly, to work the menswear trend this fall, I picked the plaid pencil skirt ($30.00) from Dress Barn, which has hints of so many different colors that you can pop it with a regal purple top or make it work-ready with a navy cardigan. Also, this skirt is sold online & in-stores in plus sizes.

Which skirts are you most inspired by? How will you be wearing your separates this fall? Which celebrity skirt look is your favorite? Where will you shop for the new fall skirts? For more stylish reads, check out previous posts including Olivia Wilde’s Glamour September photo shoot, Lauren Conrad’s newest collection for Kohl’s, & If I Stay star Chloe Grace Moretz’s recent red carpet look! Happy Styling!

In this latest Red Carpet Review post, we’re one step closer to rounding out this year’s awards season with the red carpet looks from tonight’s 2013 Screen Actors Guild Awards. The ceremony is currently airing & there’s so much movie news to report, however some of the hottest & most-talked-about celebrities have made a splash in couture, following the runway trends, including black gowns (like what we saw at the Golden Globes) on Anne Hathaway (in Giambattista Valli Haute Couture), Elisabeth Moss (in Dolce & Gabbana), Naya Rivera (in Donna Karan), Michelle Dockery (in Chado Ralph Rucci), Tina Fey (in Oscar de la Renta), Jaimie Alexander (in Marc Bouwer) & Kelly Osbourne (in Jenny Packham).

Also, side parts for hair are big, as seen on Jessica Chastain (in Alexander McQueen), Katrina Bowden (in Badgley Mischka), & Naomi Watts (in Marchesa). Colors of the night that popped were pretty pinks & purples on Lea Michele (in Valentino), Nina Dobrev (in Elie Saab), Freida Pinto (in Roland Mouret), & Sally Field (in J. Mendel).

Which looks were your favorites? Are you watching the show tonight? For more red carpet looks this season, check out gallery posts including the 2013 Presidential Inauguration, all black & leather looks on Miranda Kerr & Scarlett Johansson, Louis Vuitton’s checkered runway pieces on Kerry Washington & Jessica Alba, & the 2013 Art of Elysium Heaven Gala! Happy Styling!

We’re less than a month away from the 2013 Academy Awards & the SAG Awards are this weekend! The speculation behind the results inside those envelopes & what the nominees are going to wear have been bouncing around all over the web & for the first time, I’m going to share my fashion predictions, based off the Pre-Fall 2013, Spring 2013 Ready-To-Wear, Spring 2013 Haute Couture, & Resort 2013 collection runways. Of course, Oscar-nominated celebrities like Jessica Chastain, Jennifer Lawrence, Anne Hathaway, Amy Adams & Naomi Watts are subject to one-of-a-kind custom-made haute couture gowns, but it’s been a lot of fun to click around & find the most gorgeous gowns that wowed on the runway. In addition to the nominees who are celebrating their achievements in film, possible presenters like Rachel Weisz, Amanda Seyfried, Jennifer Lopez, Emily Blunt, Kate Hudson, Jennifer Garner & more will be turning heads on the red carpet.

Surely there will be lots of glitz & glamour, but predictions of trends are hard to tell. There was so much going on at this year’s Golden Globes, including black, black & gold, white, pink, long sleeves, cut-outs, high slits, & nude illusions. Starting off is a gold lamé & embellished gown from Michael Kors Resort 2013 Collection, which was recently featured in a Runway Rundown post. From Carlos Miele‘s Resort 2013 Collection comes this beautiful embellished sweetheart gown with an animal print under-lining. Some might call the white & black-leather accented Emilio Pucci dress from the Pre-Fall 2013 Collection is too safe for the Oscars, but I think it’s a modern & refreshing take on a white gown.

For the risk-taking Style Darling, I can see the metallic long-sleeved gown from Monique Lhuillier‘s Pre-Fall 2013 Collection making an entrance on the red carpet. I picked this tangerine Jenny Packham Spring 2013 Ready-To-Wear Collection gown b/c of its unexpected color, but on the right skin-tone, it will certainly set some trends on the red carpet for the rest of the year.

Next, we have a floral-embroidered belted gown by Temperley London, which was featured in the Pre-Fall 2013 Collection. This has a very classic, Zooey Deschanel look to it, which is why I loved including it! Badgley Mischka is a name synonymous with red carpets & perhaps we’ll see this all-over embellished metallic gown from their Pre-Fall 2013 Collection on one of the front-running Oscar nominees. One of my favorite designers forever & always is Marchesa & I wasn’t surprised to see so many red carpet candidates in their Spring 2013 Ready-To-Wear Collection, including this sari-inspired sheer-overlay blue & gold confection. 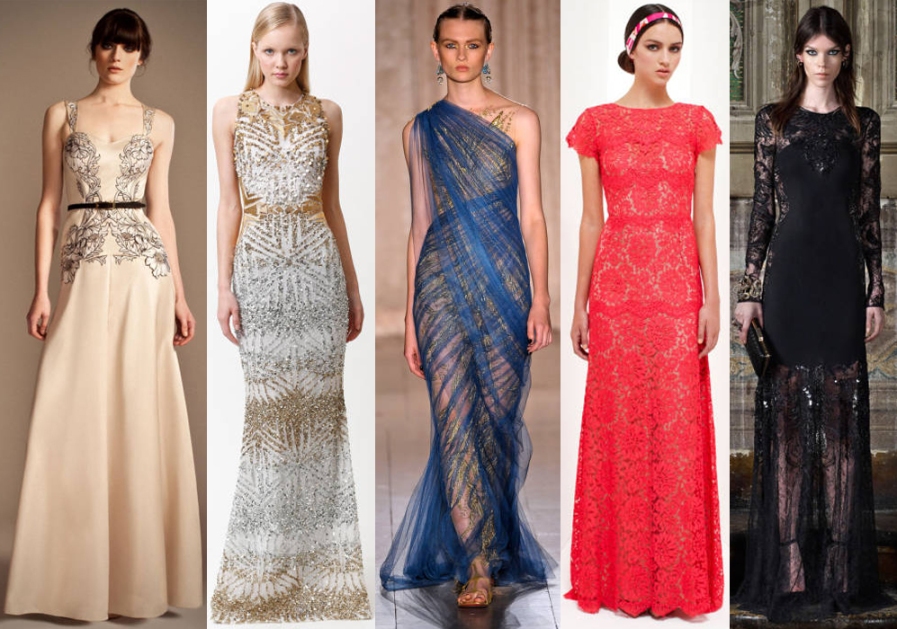 I love the feminine softness from the short-sleeved Collette Dinnigan gown from the Resort 2013 Collection. The coral / fuchsia hue is perfect for an ingénue like the ever-changing Dakota Fanning or the retro Krysten Ritter. Roberto Cavalli‘s black sequined & lace overlay corset-structured gown is a stunning choice for a more dramatic look on the red carpet & it’s from the Pre-Fall 2013 Collection. 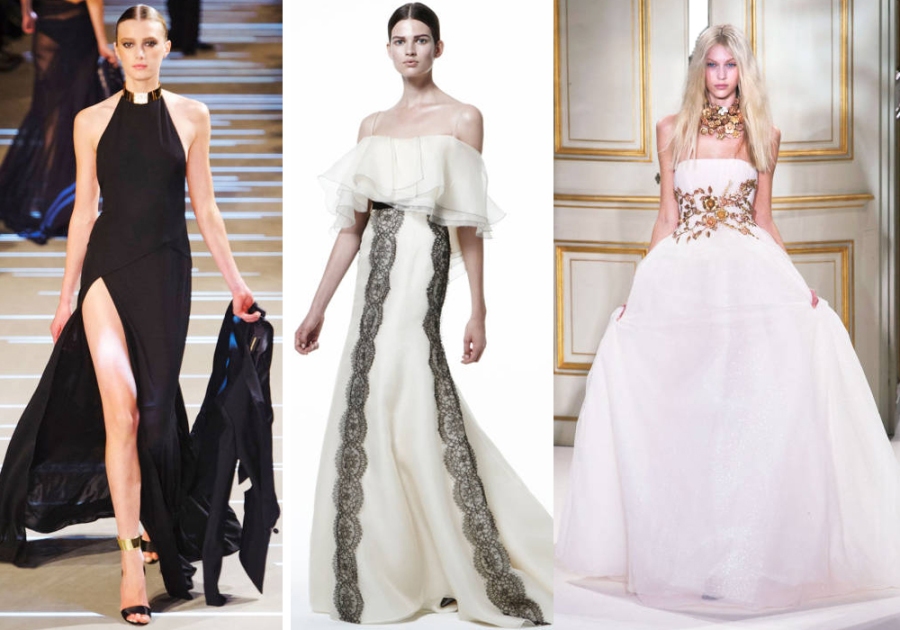 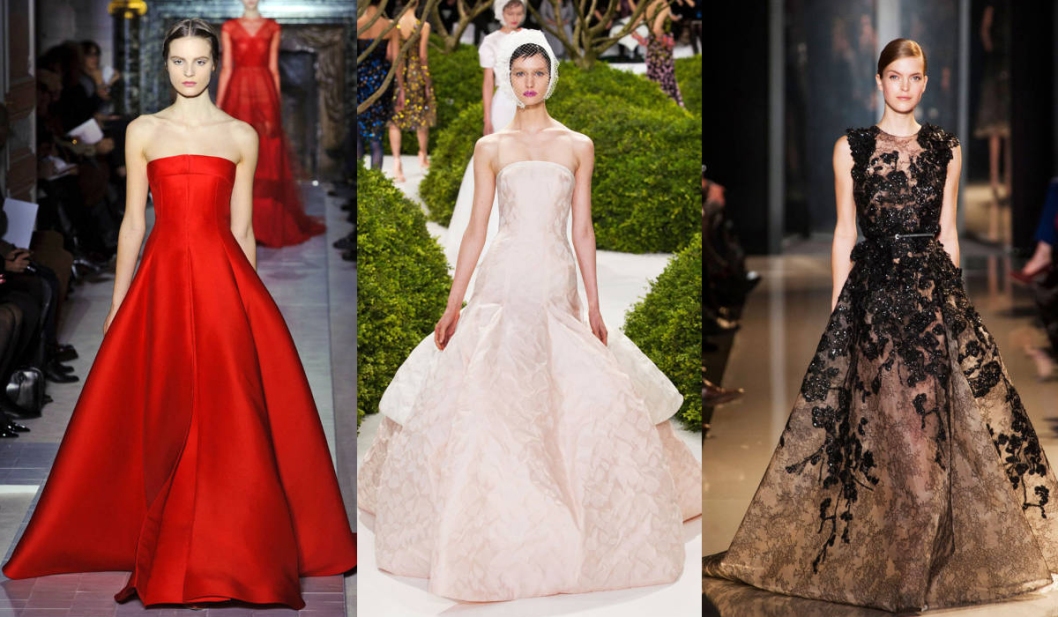 After Lucy Liu‘s splash at the Globes in Carolina Herrera, I knew I had to look further into her Pre-Fall 2013 Collection, which included this gorgeous black & white graphic print gown, perfect for fans of the label including Renee Zellweger, Emmy Rossum, or Olivia Wilde.  Next, from Oscar de la Renta‘s Spring 2013 Ready-To-Wear, this aqua tiered dream of a gown is borderline bridesmaid, but the color is just so pretty & it reminds me of the Romona Keveza ball gown that Kaley Cuoco wore at last year’s SAG Awards. 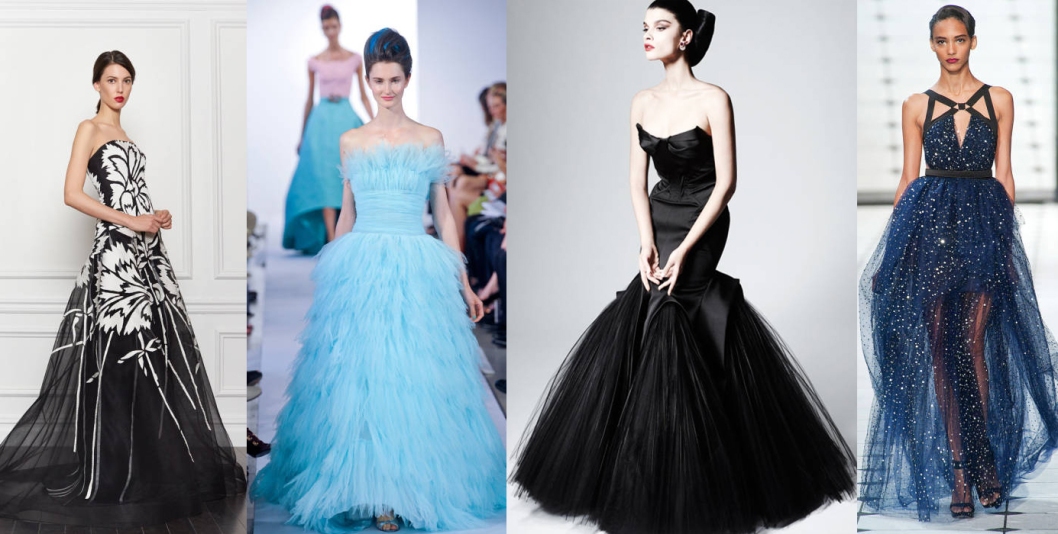 You can’t have a look at the best from the runway without talking about American designer, Zac Posen, & his Pre-Fall 2013 Collection, which is a dramatic statement that will change the way black gowns appear on the red carpet. Lastly, a daring look for the Oscars comes from Jason Wu‘s Spring 2013 Ready-To-Wear Collection & perhaps a young starlet like Emma Watson would wear this will some extra lining to fill the skirt since the ceremony is so formal.

Which designers are you hoping to see on the red carpet? Which gown is your favorite? Which nominees are you rooting for during this year’s Oscars? For more runway goodness, check out galleries including Rachel Roy, Calvin Klein Collection, Diane von Furstenberg, & Narciso Rodriguez! Also, to read more from Red Carpet Review, check out looks from the 2013 Presidential Inauguration, leather & black oufits featuring Elisabeth Moss & Scarlett Johansson, the 2013 Critics’ Choice Awards with looks from Eva Longoria & Jaime King, & this year’s red carpet from the People’s Choice Awards with Jennifer Aniston & Chloe Grace Moretz! Happy Styling!

Yesterday’s inauguration & the inaugural ball were the talk of not just the town, but of the whole country! Of course throngs of fashion fans were waiting to see Michelle Obama in her surprise gown & it’s no wonder she stuck with a fantastic design by Jason Wu. However, there’s a lot more going on that readers should also know about as we kick off yet another stylish week! Which stories are you talking about at the water cooler? Which headlines are you retweeting? Happy Styling!

*Which affordable brand did Anne Hathaway wear with her Chanel gown at the Golden Globes?*

*Meet the designers of Project Runway‘s Season 11, which premiere’s Thursday*