We know that colorblocking is a big trend right now & Alicia Keys proves it as she struts her stuff in a black & white Stella McCartney design.  We’ve seen this cute before by McCartney, but it looks brand new, fresh, & super stylish every time! Kate Winslet, Liv Tyler, & Penelope Cruz have all been seen in it. 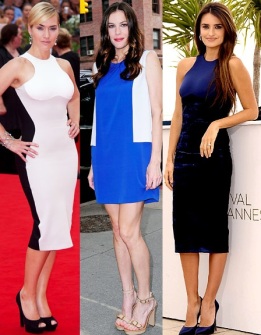 I wasn’t able to find the particular dress that Alicia is wearing in stores, but Neiman Marcus has a similarly designed frock by McCartney, costing nearly $1500.00, which can be viewed here.

Also, while I was flipping through the pages of the new April 2012 issue of Harper’s Bazaar & saw the Carolina Herrera colorblock dress ($2290.00), which is available @Saks.

However, I gasped when I saw these black & white versions b/c they reminded me so much of the black & white ponte colorblock sheath dress ($11.99) that I featured in Inside A Style Blogger’s Closet from New York & Company last month! The dress is now marked down significantly from its original $59.95 price, which is an incredible bargain! So it’s no secret that this design is figure-flattering & just about every hand in fashion & retail is trying to reach the stylish consumer with it.

What do you think about the colorblock dresses by Stella McCartney & Carolina Herrera? Which version is your favorite? Do you like the New York & Company version? Happy Styling!